You are here: Home / Blog / Mycotoxins by Angela Hobgood 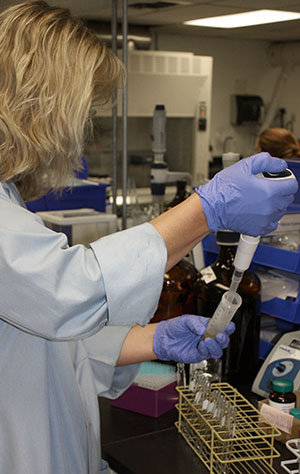 Food safety, for humans and animals, is a legitimate concern in today’s society.  Be it in livestock feed, pet food or human staples, mycotoxins are a significant problem.  Mycotoxins are secondary metabolites of fungi that have adverse effects on humans, animals, and crops that result in illnesses and death.

The term mycotoxin was coined in the early 1960’s after an unusual  veterinary crisis near London, England, during which approximately 100,000 turkeys died. When this mysterious disease was linked to a peanut meal contaminated with secondary metabolites from Aspergillus flavus (aflatoxins), it alerted scientists to the possibility that other mold metabolites might be deadly. Soon, the mycotoxin scope was extended to include over 400 compounds now recognized as fungal toxins.  Approximately a dozen metabolites of that group now gain attention as threats to human and animal health.  Aflatoxin, Citrinin, Deoxynivalenol, T-2 toxin, Ergot akaloids, Fumonisins, Ochratoxin A, Patulin, Trichothecenes, and Zearalenone are the most important analytes related to mycotoxicosis.

Mycotoxin-producing mold species are extremely common, and they can grow on a wide range of matrices under a broad scope of environmental conditions. For agricultural commodities, the severity of crop contamination tends to vary from year to year based on weather and other environmental factors. Aflatoxin, for example, is usually worst during drought years; the plants are weakened and become more susceptible to insect damage and other insults. Mycotoxins occur, with varying severity, in agricultural products all around the world. The estimate usually given is that one quarter of the world's crops are contaminated to some extent with mycotoxins.  Corn, hay, sorghum, peanuts, wheat, barley are some of the most common contaminated crops.  The economic consequences of mycotoxin contamination are profound. Crops with large amounts of mycotoxins often have to be destroyed. Alternatively, contaminated crops are sometimes diverted into animal feed. Giving contaminated feeds to susceptible animals can lead to reduced growth rates, illness, and death.

Mycotoxins can enter the food chain in the field, during storage, or at later points. Mycotoxin problems are exacerbated whenever shipping, handling, and storage practices are conducive to mold growth. The end result is that mycotoxins are commonly found in foods. Some authorities rank mycotoxins as the most important chronic dietary risk factor, higher than synthetic contaminants, plant toxins, food additives, or pesticide residues.

In general, mycotoxin exposure is more likely to occur in parts of the world where poor methods of food handling and storage are common, where malnutrition is a problem, and where few regulations exist to protect exposed populations.  Methods for controlling mycotoxins are largely preventive. They include good agricultural practice and sufficient drying of crops after harvest.