You are here: Home / Blog / What in the World is Guar? by Matt Patricio 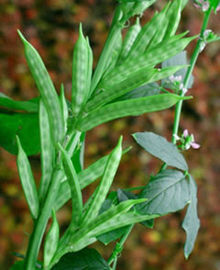 Guar gum, also called guaran, is a polysaccharide composed of the sugars galactose and mannose produced from guar beans. The guar plant, an annual legume, is currently grown mostly in India and Pakistan. However, high demand has resulted in the introduction of cultivation of guar in new areas. In the United States, production has gone from 4,600 metric tons to 14,000 tons of guar in the last five years. In Texas alone, acreage has fluctuated from about 7,000 to over 50,000 acres since 1999. The guar seeds are dehusked, milled, and screened to obtain the guar gum, which is typically sold as a free-flowing, off-white powder.

There are a variety of applications for guar gum spanning several industries. The largest of these markets is the food industry.  Guar gum is used as a thickening agent in foods and beverages and a stabilizing, suspending, or binding agent in items such as soup, jam, salad dressing, and ice cream. Also, guar gum is one of the most frequently used gums in gluten-free recipes and gluten-free products. Today it is estimated that food-industry applications of this product account for the vast majority of the world’s supply of guar gum–on average over 70%.

In manufacturing, guar gum is used as a thickening agent in lotions and creams and as a binding agent in tablets. Additionally, the industrial demand is on the rise rapidly due to the use of guar gum in hydraulic fracturing, for the production of oil shale gas.

Currently, at EPL, we test guar gum for volatile aldehydes concentrations using GC-MS analysis. We are also currently working on a method to test alpha-amylase activity in Xanthan gum, a product with similar properties to guar gum.

"Many thanks for your diligent and knowledgeable work done to complete the analytical report for this study in a timely manner. Please extend my sincere thanks to the rest of the team at EPL that have contributed to this project. I have also enjoyed the opportunity working with you once more and look forward to […]